Below you'll find pictures taken during Ellie's first two months with us — just click on the thumbnails and a window with a larger picture will appear. More coming soon! 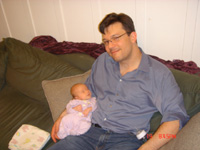 Courtesy of Uncle Jordan: not sure what day this was taken, but Joe, Jordan and Trudy had come over from Sausalito for dinner. Sean had to work late or something, so he missed most of the visit, but got a chance to kick back with the kid towards the end...

5/15/2005 While Ellie sleeps, her ever-growing squadron of plush toys keeps an eye out for trouble. They look harmless enough, but every one of them trained at Quantico. Respect.

A Grand Day Out

5/13/2005 One Friday, Ellie put on her pretty summer dress for the first time. Delighted with the results, she decided to indulge in some impromptu "tummy time."

After that, she gathered her thoughts and contemplated the rest of her day.

Not comfortable sitting on the changing table for extended periods, she retired to the recliner for further rumination.

However, the recliner soon proved to be insidiously comfortable.

But wait! Who could that be at the door? It's Daddy, returning home early from work. Good old Daddy!

Soon, though, Eleanor decided that it was time for milk. Dad, who in general prefers beer, was nonetheless forced to agree. But where to find milk?

Perhaps there will be milk in the park! Come on, Mom!

No milk here? Look over there! It must be somewhere close by.

Ah, that's the stuff. We should come to the park every day!

What? What are you looking at?

4/21/2005 Since she can't stand up yet, marking Ellie's height on the wall with pencil isn't an option — but every so often, we plop her down in the recliner (see above), see how much of it she fills and document it with a picture. The first one was the night Grandpa Thomas got into town, back in April...

5/12/2005 Then, just last week, we placed her in the chair again: amazingly, she is a larger baby than she was several weeks previously! (Okay, so there's not really a shared frame of reference between the camera angles, but you'll have to take our word for it. Look, her jammies are smaller too, see?)

In truth, Eleanor is generally oblivious to most of her parent's camera-related shenanigans, but once in a while they coincide with a nice dream.

Lots of friends were in attendance, including many of Jen's staff from HAPS...

...and Jeffrey and Nuala. And those are just the ones we had the presence of mind to photograph! (Hopefully more photos will surface, please drop us a line if you've got any!) 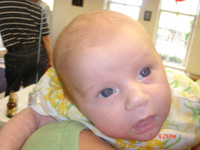 While Eleanor had previously slept through most public appearances, she was a real star on this occasion!

She had lots of opportunities to snuggle with Grandma Jan... 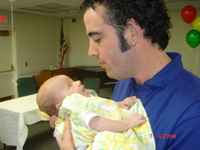 ...she had some good face-time with her Uncle Jordan (who took many of the best pictures from the party!)... 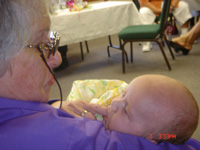 ...and of course she got to cuddle with her Great-Grandma Tru!

It was a great day, and Ellie got to show off her lovely party dress, courtesy of Chris and Debbie Fritz!

4/21/2005 A little over a month after Ellie arrived, Grandpa Thomas arrived at SFO and got to meet his granddaughter for the first time!

That same day, Chris and Debbie Fritz's lovely gift of a summer dress arrived — Ellie wore it a couple weeks later and it fit beautifully (see party photos above), though the hat may take a litle while longer.

...where they posed for photos in front of the fountain...

...and broke in Ellie's new sling!

4/23/2005 On Saturday, Ellie took her first trip out of San Francisco city limits as the family visited Great-Grandma Trudy's house in Sausalito. Both Grandpa Peter and Grandpa John had a chance to snuggle with her...

During dinner, Ellie got passed around and had a chance to visit with everyone!

After dinner, Ellie hung out with the Perlman siblings (1970s-80s vintage) and Grandma Jan — though by this point she was having some trouble holding up her end of the conversation.

Later, Ellie reflected on Grandpa's visit during a quiet moment.

Miscellaneous Early Pictures
(or, It's All a Blur)

3/18/2005 We know that we arrived home on the Friday after Ellie's birth, but after that everything gets a bit hazy for a while...

We vaguely remember trying out new outfits, some more flattering than others, and smiling a lot...

And family visits! Yes, we know there were some of those, because there are pictures that document them! When exactly they happened is anyone's guess.

Mostly, though, it's just a blur of feedings, diaper changing, and the occasional stretch of sleep.

One Saturday, maybe a month after Ellie was born, Grandma Jan and Grandpa Peter drove down from Monte Rio, cooked a lovely meal for all of us and had a chance to visit with their granddaughter for the first time since the hospital.

Eventually, things settled into more of a routine, certain younger members of the family started waking up a little more frequently...

...and life began to return to something resembling a regular schedule. Hooray!

3/15/2005 No mistaking the date on this one — it's the first picture Sean took of his daughter, within an hour after her birth! Note the purple hematoma on her head, which coupled with a lack of crying after birth prompted a couple days in the ICU; in the end, though, she was given a clean bill of health!

...and pretty soon Mom gets in on the action!

And a hungry Turtle she was!

3/16/2005 As Ellie (and her mom) discovered the next day, nursing can be hard work when you arrive a few weeks early!

A fascinating preemie trait: the two-tone effect when the baby's been lying on one side for a while, known by the nursing staff as "Harlequining".

Even by the end of day two, though, Ellie's sweet and inquisitive nature begins to emerge.